How to Track Each Individual Ad’s Performance Using Google Analytics: The Mistake That’s Costing You a Fortune in Marketing Spend

…and you probably know how to access the individual metrics of each ad from inside Facebook, Google, or wherever you bought the ad space.

But, did you know that you can track the monetary value of each ad? In other words, you can see the REAL-WORLD value of your advertising.

Using this knowledge you can discover which ads are generating the greatest income and the highest conversions, not just the highest clicks.

Let’s look at an example:

I’m running two Facebook ads with the aim of making conversions. The ad copy, video and budget is exactly the same in both ads (because I’ve optimised them using data), but the audiences are different.

When I check on my split-test on Facebook, I can see:

I need to cut Advert 2 and either scale up the budget on advert 1, or create a lookalike audience of advert 1, and optimise further.

However, because I know how to check the conversion performance of each audience, I can see:

This check is something that costs businesses every day. If you don’t check the monetary value of your ads, you’re practically playing a guessing game on value.

In the example above, 99% of businesses would scrap advert 2, believing that most of the revenue came from advert 1, and they’d lose out on their highest converting ad.

Some ads are more click-worthy than others, but don’t prime users to buy. Some audiences are happy to browse, but not buy. Some targeting tactics pick out clickers, not buyers. And all of this valuable data is concealed by NUMBER OF CLICKS and CTR (click-through-rate).

You’re going to make that end today and I’m going to show you how.

Using the information in this guide, you’re going to learn how to find the most-valuable ad styles, audiences and targeting tactics, and scale your advertising skills up to the next level.

The only way to track the monetary performance of each individual ad is to use different links (or URL’s) for the same page. In other words, you need to put unique links in all your ads, even though they’re going to the same place.

This might bring some of you out in a cold sweat, but stick with me for a moment.

Historically, you’d have to ask a developer to create identical landing pages for the same product over and over again, until every ad had its very own landing page. This meant serious time and money…

…but there’s a better way, and you can do it all for FREE in just a few moments.

Google, using a tool they created specifically for testing the performance of ads that all run to the same landing page.

And now, I’m going to walk you through every step of the process.

The first thing you’ll need to do is get over to Google Analytics Campaign Builder (Click on that link, it’ll open in a new tab).

You’ll know you’re in the right place if the page looks like this:

Now that you’re here, I’m going to show you how to set up your unique URL’s and how to track their performance.

How to Create a Campaign

When you’ve opened the link to Google’s Campaign URL Builder, don’t click anything (other than to favourite or bookmark it for later).

As you look at the page, you’ll see that there are a number of empty fields.

The first field asks for the ‘Website URL’. This is where you must copy and paste the link of your desired landing page.

For example, if I was running an ad for a new toothpaste, I would enter the link of the toothpaste’s landing page, NOT MY HOMEPAGE.

The next field asks for ‘Campaign Source’, this is the place your adverts are running. For many of you, that will mean Facebook or Google. If your ad campaign is running somewhere else, enter the source here.

Let’s pretend that I’m running a promotion for the toothpaste on Facebook, I’d simply enter:

After this, you’re asked to enter the Campaign Medium. You can simply enter the style of ad you’re running, but I always write the aim of my advertising campaign here. It’s easier for me to track later on.

If you’re aiming for conversions, write conversions here. If you’re hoping for registrations, lead generation or engagement, use that here too.

The next field is absolutely crucial. It’s called ‘Campaign Name’. You must save or make a note of exactly what you’ve written here and ALWAYS use a unique name.

The ‘Campaign Name’ is what you’ll use to track the performance of each individual ad. So, you really don’t want these all to be the same.

As an example, if I was running 3 different ads for my new toothpaste, I’d use a slightly different Campaign Name for all three, and make a note of which ads they served. E.g. NewToothpaste1, NewToothpaste2, NewToothpaste3.

I could then enter all Campaign Names into an excel or word document, alongside their unique URL, and the ad that they’re running on.

This is my reference point for each ad’s performance.

The final two boxes are for ‘Campaign Term’ and ‘Campaign Content’. I rarely use either of these fields, but that doesn’t mean you shouldn’t.

Campaign Term works as a reference for keywords you’ve used in your campaign, which is especially relevant to Google advertisers.

…this might sound useful, but I always set up the link before I create the ad (because the link goes on the ad), so I leave it blank.

When you’ve completed the fields (as above), you’ll reach a section entitled, ‘Share the generated campaign URL’.

If you’re happy that all the information you’ve entered is correct, and you’ve made a note of your Campaign Name, hit the ‘Convert URL to Short Link’ button’.

(You need to have a Google Analytics account for this to work! Get one! It’s Priceless!)

This will generate a shortlink for your landing page that you can place on an ad to track its progress.

Copy this shortlink into your Excel or Word Document alongside your Campaign Name. Then scroll up to ‘Campaign Name’ and change it to the next name you’ll use in your campaign.

Copy and paste the campaign name and shortlink, so you know exactly which link is which.

Placing the Link in an Ad

The above process might seem a little technical, but trust me, after you’ve done it once, you’ll see exactly how quick and easy it is. It takes minutes, and the data it reveals is invaluable.

Now that you’ve got the shortlink, you need to place each individual link on the ads that you’re split testing. And make a note of which ad contains which link.

Double check that you’ve made a note of the ad name and the Campaign Name from Google’s Campaign URL Builder, and you’re all set!

Your ads are now completely trackable!

Here’s where that tiny bit of extra effort is going to really pay off!

You have a variety of options when you reach this point, depending on the aim of your campaign.

If you’re happy to track the conversion performance of your ads for the landing page that they link to, you don’t need to do anything. Simply make sure your Google Analytics is set up for Ecommerce. (if you’re selling online, even if it’s a Service, you must set this up!) 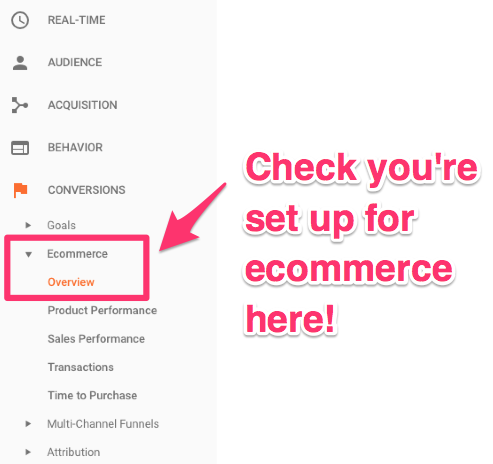 When you know that your Google Analytics is Ecommerce ready, go to Acquisition > Campaigns.

This tab will display the performance of each of the Campaign Name’s you set up. You can then reference which Ad is served by which Campaign Name, giving you the crucial conversion and monetary metrics that you cannot discover from your advertising platforms. 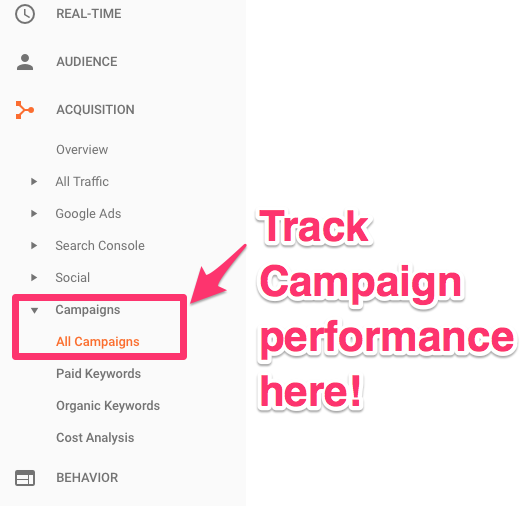 You can also set-up the cost-analysis tool to reveal the real numbers behind your campaigns.

If this data wasn’t enough, you can also set up Goals, and measure the performance of each campaign. This is particularly relevant to those people looking to discover which audiences are more likely to take upsell offers, or marketers who are purely aiming for lead generation. Use Goals to discover much more in-depth and accurate data about each Campaign. 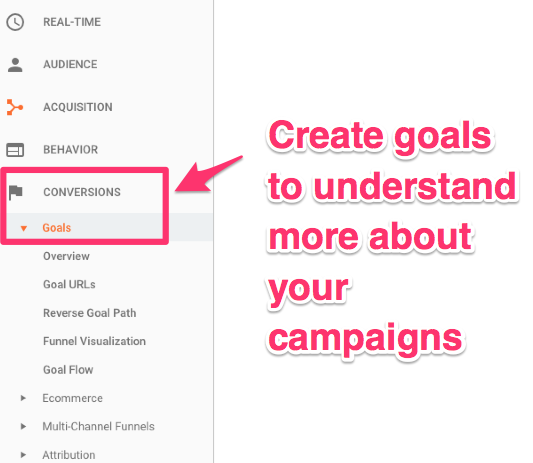 When you’re inside the Goals tab, click ‘Set up goals’, then the ‘+ New Goal’ button. From here, Google walk you through Goal creation for Analytics.

(I could show you how to do it, but we’ll save that for another day! There’s plenty to process in this article already!)

When it comes to time vs. value, setting up individual links for each ad is off the chart. It takes 5 minutes, and gives you data that is absolutely priceless.

If you’re serious about selling online, you simply MUST do it.

It might take a little bit of practice, but when you’ve found your rhythm, it’ll take minutes to complete.

Try it out for your next campaign. You might be surprised about what those clicks really mean.

What do you think about link campaign tracking? Have you tried it? Maybe you know an alternative method? Leave a comment, we’d love to hear your opinion!